It will come as a surprise to few that on September 1, 2021, a new law went into effect in Texas that regulates access to abortion. All abortions after six weeks are now outlawed, without exception for rape or incest. Many laws like this one have emerged from conservative states, but have been unsuccessful, so what makes this one different? The outlier of this particular ban is how it is enforced.

Traditional state enforcement is out of the picture here. Now, any private citizen can sue a party who they believe to have performed an abortion, or “aided or abetted” in a abortion. This defendant could be a doctor, a friend giving advice, or even an Uber driver. Should the plaintiff prevail, each defendant is responsible for a minimum $10,000 payout, as well as covering all legal fees.

This turns the responsibilities of law enforcement into the hands of private citizens, avoiding the prosecution of any state official, which was the law’s goal. Because of these circumstances Texas is able to mostly evade judicial review. This means that a larger problem now comes into play, one that makes our country seem like a dystopian novel. If this theory can be applied to a court-acknowledged constitutional right like abortion, what’s stopping a law from being passed that prevents someone from owning a semi-automatic weapon? A neighbor who discovers you are in possession of one can sue. This could be applied to same-sex marriage, government criticism, and more.

Justice Sonia Sotomayor said in her dissent, “The Texas Legislature has deputized the State’s citizens as bounty hunters, offering them cash prizes for civilly prosecuting their neighbors’ medical procedures.” Is the future of our country’s law enforcement by bounty hunters? These new avenues of law threaten the status-quo of our government, and possibly the American way of life. 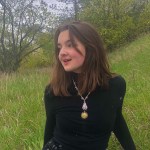 My name is Claudia and I'm a sophomore at City! I enjoy studying politics, law, and history. My other interests include music, art, fashion, reading, and spending time in nature.

"Constitution in the National Archives" by Mr.TinDC is licensed under CC BY-ND 2.0