Most of us know what Halloween is, but most of us don’t know the history behind it. This holiday is more than just dressing up in a costume or going door-to-door asking for candy.

“Halloween” literally means “hallowed evening”, and the holiday was actually previously referred to as “All Hallow’s Eve” to honor “hallows”, which are more commonly known as saints.

This celebration is also known as the day before All Saints Day, a Western Christian feast. While this is a religious tie to Halloween, in North America and most of Europe, Halloween is a non-religious holiday.

The festival of Samhain (which occurred on October 31st in Ireland) is where Halloween is believed to have originated. During this festival, the souls of the dead were believed to have returned to their homes. Some people wore masks to disguise themselves from the ghosts that had returned to Earth. This is how witches, fairies, demons, and more started to play a role in this day. Another reason for the day occuring on October 31st is the arrival of the dark season.

This holiday was mainly thought to be a time where the living and the dead were able to connect with each other. Halloween became a spooky and haunted holiday for this reason. The darker rituals of the past developed into more of a lighthearted and fun celebration. The 20th century is when Halloween really became a big hit in the United States, and it has been ever since.

The history of trick-or-treating in the United States is also quite interesting. People dressed up in costumes and would go from house to house asking for money or food. Europe started this tradition, and we followed suit. Handing out treats was also intended to prevent naughty children from playing pranks on people.

Halloween might have started as a spiritual event, but it has evolved into a fun holiday that consists of many traditions like bobbing for apples, carving pumpkins, lighting candles, playing usually harmless pranks, and much more.

Halloween is a very popular holiday that many people celebrate, and knowing the history of it makes it even more interesting and enjoyable! 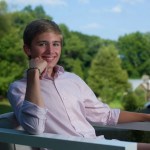 "Spooky forest in the morning" by Kenth Fagerlund is licensed under CC BY-NC-SA 2.0