As a spectator of the City High musical practices this year I can say that there was talk among the participants that there would be no crowd and that they were working with the ticketing company to refund the tickets back to people who had purchased them. Then the next day, the tickets were advertised again and it’s now said that we will have a live audience. What is really is going on with the musical, and will we still be buying tickets to see it in person?

Due to COVID concerns, Music Man was said to be recorded. Although not like a movie in a sense where they could reshoot scenes, but rapid-firing recordings that would be sent through to be viewed afterward. The principal was present during this talk and so were the coordinators. One of the coordinators working the show states that it is confirmed to be in person and carries on like normal. Music man was originally going to be virtual but licensing said it was mandatory that this show has a live audience. Music man currently has the site still online allowing adults and students to purchase tickets. If you wish to purchase a ticket to see The Music Man, visit: citytheatretickets.ludus.com 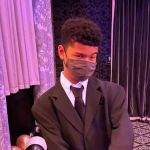 My name is Leander Galindez and I am a freshman at City High Middle School. I am new to City Voice and I enjoy playing sports, being active, and love being at school with my friends. I love to really think and deconstruct anything to its core, and through City Voice I can have a place to collect and share my thoughts. If you have any questions about my articles or me, you can email me at galindez-l@students.grps.org.

"C scale notation over musical staff" by Horia Varlan is licensed under CC BY 2.0