Recently, astronomers have discovered a planet orbiting in a binary star system, meaning that within this system, there are two suns, similar to Tatooine in Star Wars. We’ve discovered more than 5,000 extrasolar planets, or planets that are 30 light years away from Earth, which is relatively close astronomically. However, out of the 5,000 planets, only 4% (or 200) planets are within a binary star system, meaning that this is fairly rare.

The two stars together are called GJ 896AB. They’re only about 20 light-years from Earth, which again, isn’t that far in comparison to the rest of the massive universe. These two stars are called “Red Dwarf Stars” which is the most common type of stars in our galaxy. The larger of the two stars is about 44% the mass of our Sun, and the smaller star is about 17% the mass. If you were to compare the distance between the two stars, it would be about the same distance between Neptune and our Sun (≈ 2.8 billion miles). They’ve been observing GJ 896AB from 1941 but started using data from the National Science Foundation’s VLBA (Very Long Baseline Array) from 2006 to 2011.

Astonomers have been using astrometry, a method of measuring the positions and motion of stars, to track GJ 896AB. While using this method, they detected a “wobble” that was due to a planet’s gravitational effect on the star. After tracing the larger star’s motion, astronomers found a gas giant, similar to Jupiter but about twice the mass. In comparison to the planet’s sun, it would be slightly closer to its sun then Venus is to our Sun (≈ 66.8 million miles). The planet orbits around the larger of the two stars in the opposite direction to the second, smaller star.

Because these two stars and planet are such a compact binary system, it will be easier to gain more information about how planets are formed within a binary system. By using astrometry and finding this planet, they were able to create the first 3-dimensional structure of a binary star system with a planet that orbits one of the stars. This has been a significant advancement in the astronomy department as it will help us understand planet formation in general, whether they’re in binary star system or other systems. Although this 3D model has exceptional detail, there’s no sign to whether there’s a cantina or a rebel base on the planet yet! 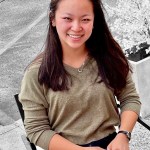 My name is Keira Mei, I’m an 11th grader at City this year. I went to John Ball Zoo School in 6th grade and have been going to City ever since. I play the cello and also enjoy playing piano in my free time.