Shang-Chi and the Legend of the Ten Rings (film) is rated PG-13 by the Motion Picture Association of America.

Shang-Chi comes from a powerful family from China, as his father has been in possession of the Ten Rings for the past 1,000 years. Shang-Chi learns harsh fighting skills and “every way to kill a man” from his father. At fifteen, Shang-Chi is assigned his first mission but instead decides to run away, for he cannot go through with the mission. He moves to America and learns how to live on his own. Almost twenty years later, he receives a wake up call from his father. What happens next? Watch to find out!

The story of the “villain”, also known as Shang-Chi’s father, Wenwu, is quite unique. Typically, villains are power hungry and are always wanting more. Wenwu does not seek power, he only seeks his wife who balanced his life after he had become so involved in his path with the Rings. This is another reason that Shang-Chi is a good introduction to the new era of the MCU – maybe the new villains will not be the traditional ones that we have seen before.

Feeling nostalgic for the old era of the MCU?

I know I’m not alone in feeling nostalgic for the last era of the MCU. It is hard to say goodbye to the Avengers and all the other characters we have grown up with. Not to mention we have scarcely known any new and prominent characters in the past ten years in the MCU. Change is hard, but this new era seems to be satisfactory. Shang-Chi is a great introduction to this new era of the MCU. The action scenes are immaculate, some of the best – I would say – in the MCU.

The art of fighting is truly seen in this movie. Each fighting scene uses a type of martial arts. The flips and kicks in this film will leave you in disbelief! The choreography of each and every fight scene is intricately played out. I think the most entertaining and satisfying parts of the movie were the fight scenes, if only because of their perfection and intricacy.The special effects look to be completely realistic and will blow your mind as well.

Shang-Chi also includes a couple of old favorite characters for all of you who are still not sold on the new era of the MCU. I would say that the first movie in this new Marvel era definitely is living up to past standards, if not going above and beyond them. The details in the film are unlike any I have seen in any Marvel movie before, too say nothing of the humor. Awkwafina plays a huge part in the movie’s comedy, some may call her the “comedic relief” in this film. The jokes cracked throughout the film will have you shaking with laughter. I am looking forward to the new era of Marvel after this movie – which is not how I expected I would feel. As I am sure many of you also feel, I miss the OG 6, and I miss the feeling I had watching the first Avengers movie for the first time, but Shang-Chi proves there can be room for both eras to coexist and still please their audience as much as ever. 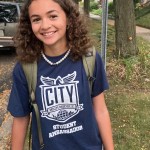 My name is Lucia and I am a freshman at City High Middle. Some of my favorites things are soccer, reading, Clairo's music, and the movie Little Women.