The Harry Potter and Fantastic Beasts Instagram accounts have posted the title and the release date of the third Fantastic Beasts movie, and fans are going crazy. There are so many questions- what will happen in the movie? What will we find out about Dumbledore? Will it show what happened after Queenie and Credence joined Grindelwald?

Fantastic Beasts: The Secrets of Albus Dumbledore is an upcoming movie directed by David Yates, written by J.K Rowling and Steve Kloves, and starring Jude Law, Mads Mikkelsen, Eddie Redmayne, and Katherine Waterston. It is due to hit theaters on April 15th, 2022 and the HP and FB audiences are on the edges of their seats, even though details were only released a couple of weeks ago.

What will happen in the movie?

Everyone wants to know. Personally, I think the movie will display Dumbledore’s past and his history with Grindelwald, and expand more on the information we discovered about Dumbledore in the seventh Harry Potter book, Harry Potter and the Deathly Hallows.

Will it be successful?

As of November 6th, 2020, it was confirmed that Johnny Depp would no longer be playing Grindelwald when he posted a short letter on his Instagram. Many fans were extremely disappointed, and even threatened to boycott the next movie, where Depp would be replaced with Mads Mikkelson. Nonetheless, I believe the movie will be successful because people are dying to know what the movie will bring, especially after Fantastic Beasts: The Crimes of Grindelwald left the audience on a cliffhanger. 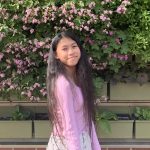 Hiii! My name is Lia and I’m a sophmore here at City! A few fun facts about me: I’m one of the student ambassador co-presidents, the historian on the NHS executive board, the Chinese Club spearhead, flute section leader in the band program, part of the City Voice, and the class of 2025 student government president! Outside of school I’m involved in Youth Grant Committee or YGC, I’m the executive outreach director for GENUp MI, and I play tennis for Ottawa Hills. Some of my hobbies include spending time with family and friends, reading, playing tennis, and playing my flute.