Aaron raced through the laboratory. It was deadly silent except for his breathing. He ran up the last flight of stairs and turned the bend. The medical rooms were in sight. He reached the one he had put Scarlett in. It was empty. Aaron’s face paled. How could he have done this? He left her alone to fend for herself. He sank to his knees. He had never felt loss before, but now he felt a great pain like he had been stabbed twenty times over.

“What’re you doing here?” A voice behind Aaron inquired. Aaron spun around, expecting Walter and the kid to be standing there. Instead, he saw Scarlett. Something looked a little off about her, but he figured it was just the fact that she had been attacked by a monster a couple of hours ago.

“I thought you were dead!” Aaron exclaimed.

“What? How could I be dead?” Scarlett replied.

“Because…” Aaron trailed off. A figure behind Scarlett stepped forward. It was a teenage kid.

“Hello, Aaron. We meet again. Fully alive, that is,” the kid said cheerily.

“Wait… hold on,” Aaron realized what happened. He was delusional. It wasn’t Scarlett, it was Walter and the kid.

“You look like you’re about to pass out, Aaron,” the figure, who he finally realized was Walter, commented.

“So you’re not Scarlett? I must be going insane,” Aaron replied, then walked over to the cot and passed out.

“What should we do with him?” Walter asked the kid.

“You’re the adult. Figure something out,” the kid replied.

Walter decided the safest thing. He would wait until Aaron woke up. The kid disliked the idea.

“I changed my mind. You’re going to go and grab some smelling salts from the kitchen and we’ll wave it under his nose. If that doesn’t work, we’ll get a big bucket of water and dump it on him,” the kid said.

“No. That’s a terrible idea,” Walter told the kid.

“What?! That’s even worse. No way,” Walter exclaimed.

“I made up my mind. See you later, Walter!” The kid walked out of the room.

“Get back here!” Walter yelled. The kid didn’t even look back.

Scarlett had been walking for quite some time now. She was starving, so she decided she would pop into the cafeteria for a quick snack. Or enough food for breakfast, lunch, and dinner. She was still bruised and in pain from the monster, but she could barely feel it anymore.

She walked down a hallway with operating rooms in them. It had been her dream to perform surgery, but she took a different path into ecology. Being an ecologist wasn’t as thrilling, but it was fascinating. She loved her job, and after Aaron had found the red book, as they called it, she liked her job even more. What they had worked on was almost like surgery, but the results were much more disastrous than any sort of surgery might be.

Scarlett heard movement from the other side of the cafeteria and ducked under a table to hide from view. It could very well be the creature, she reasoned. After what seemed like an eternity, she looked out from under the table. Something was going into the kitchen. It turned around for a second, and Scarlett quickly flattened herself against the floor. Whatever was there didn’t notice Scarlett. It walked into the kitchen.

Walter was bored of waiting. He tried many methods to wake Aaron up, but even a hard slap to the face didn’t do the trick. He tried the kid’s idea of pouring water from the janitor’s cart on Aaron, but the water was warm and soapy and didn’t faze Aaron. Walter was getting increasingly impatient. He was just about to go out and look for the kid when he heard footsteps. They had a certain rhythm that couldn’t be associated with those of a monster, so Walter walked out of the room to see if the kid was back. The kid was indeed back, skipping down the hall.

“Look, Walter! I got some food-and smelling salts,” the kid told Walter with an evil grin.

“Great. Keep it down, though,” Walter said.

“As ever,” the kid responded. They put a smelling salt under Aaron’s nose, and he flew off his cot.

“Ah! Get it off me!” Aaron slapped his nose, trying to hit something that wasn’t there. “Where am I? Who are you? Why am I here? What did you do to me?”

“Relax, Aaron. You fainted, so we woke you up,” Walter told Aaron.

“It was the kid’s idea,” Walter said.

“It was effective,” was all the kid said.

Scarlett could finally go into the kitchen. Whatever had gone into it had left, leaving Scarlett alone in the cafeteria. She rose from under the table, stretching the cramps out of her legs. Walking over to the kitchen doors, Scarlett paused. A noise like vibrating metal came from inside the kitchen. Scarlett remained deadly still, inches from the door. After a long time, She found the courage to open the door.

A pan lay on the ground in front of her feet. It was twisted and mangled, but looking around the room, Scarlett couldn’t see anything that was the cause of this pan’s butchered features. She took a few more silent steps into the room. There was a light switch to her left, but she didn’t bother to turn it on. The light from the windows of the room was enough to bask this room in light. There were jars, pans, boxes, and plates scattered throughout the room. There was a table in the center that had sinks on it.

On the far side of the room, freezers and refrigerators were lined neatly together. There was an oven and some cabinets and pantries on the right side, and an industrial-sized sink next to more pantries and cabinets on the left. Next to Scarlett was an odd steel-topped table. It had boxes of latex gloves, hairnets, and disposable masks on it. There was an open container of store-bought cookies amid the boxes.

The cookies were frosted in bright colors, and they seemed relatively fresh. Scarlett reached for the cookies, but she pulled her hand away before grabbing the box. Who knew if the cookies were stale? They looked like they were fresh, but looks can be deceiving, Scarlett thought. She decided to look for something filling.

The refrigerators contained startling amounts of fruit juice and ice cubes. Paper bags of food were labeled with last names, and they held lunches. The lunches, Scarlett presumed, were for people who worked here. In the six years Scarlett worked here, she never knew that a public refrigerator was in the kitchen. The first lunch consisted of a salad and a yogurt parfait. Scarlett knew that the parfait had probably spoiled, so she moved on to the next lunch. Inside was a roast beef sandwich and a milkshake.

Most of the lunches were spoiled, but one of the last lunches was still good. Scarlett thought that a bag of trail mix and a can of tuna would work as a meal. The only problem was that there was no can opener in sight. The cabinets and pantries were labeled, but they only had items like gravy spoons and oven mitts. She started pulling open all the drawers, hunting fiercely for a can opener. She opened the drawer labeled COOLING RACKS and nearly fainted. 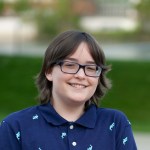 My name is Luke Fann, and I am 12. I love to write fantasy, play Dungeons & Dragons, and play disc golf. I also like to read, bake, and draw!

"New Kitchen" by jhiner is licensed under CC BY-NC 2.0