Fashion trends in this day and age tend to change on the daily, and it’s important to remember the large impact that the black community has had on the fashion industry. There is actually a lot more trends that originated from black culture than most know of. Here are just a few that you may see everyday.

The bucket hat has definitely made a comeback in these past couple of years. It started to get popularized by black rappers in the 1980s and continued to pave a new path into streetwear and hip-hop culture throughout the 1990s. Many famous black celebrities also wore the bucket hats such as Jay-Z, Tyra banks, Big Hank, LL Cool J, and Run DMC. Jay-Z even popularized them when he came out with an album cover wearing one. Bucket hats are becoming more and more popular with new patterns and brands coming out with unique ones.

Another big fashion trend that originated from black culture is oversized clothes or streetwear. Yes, most people will say that men started this style but widening the limits for women as well were definitely start by the black queens. Icons like TLC and Aaliyah went outside of the box and evolved a more masculine look into a feminine one. Baggy clothes are very popular right now with the gen-z generation and can be found on runways, magazines, with social media influencers and other. Lose fitting sweat suits also tie into the baggy clothes look and was definitely a pretty big trend in the early 2000s.

TLC at the 1995 Kids Choice Awards

One last trend is hoop earrings! Black women should absolutely earn the credit to the population of the hoop earrings! Historically, Hoop earring date back to 2500 B.C.E from the ancient African civilizations. Sumerian women are believed to be the first ones to wear the hoop earring in 2500 B.C.E. During the 1960s and the 1970’s hoop earring became associated with African culture and one of the things that enhanced that were people like Nina Simone (a singer songwriter) and Angela Davis (a political activist) who wore them. This once hated on style has now become one of the most popular known style of jewelry there is with influential celebrities wearing them everyday. 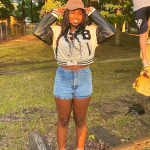 Hi, my name is Anna Wetzel and I am a sophomore at City this School year. I love to sing and I am in choir this year! I enjoy makeup, reading, fashion, photography, and writing. I also really enjoy nature and hiking. If you see me around, don't be scared to say hi.