Art by a City student. Learn more about having your art featured at thecityvoice.org/contribute.

Today’s gonna be long, I thought as I checked the cupboards. I’m going to have to get more food. With a sigh, I went to the closet and grabbed the brown game bag, swinging it over my shoulder. Then I got my knives’ belt and strapped it around my waist, putting the hunting knives in their slots. As I walked out of the house, I heard a familiar voice behind me.

“Need food?” I whirled to see my father leaning against my house.

“Dad?” I whispered in disbelief and shock.

“Are you going to go hunting or harvesting?” He pushed off the wall and strode to stand in front of me.

“That doesn’t matter. What does matter is a secret I kept from you your whole life.”

“Secret? What secret?” Father started walking toward the woods and I instinctively followed.

“You had a sister.” I stopped walking abruptly.

“Her name was Kenzie. She was my firstborn and I… I’m the reason she died.”

He kept walking and I forced myself to follow. After minutes in silence, I yelled, “Dad!”

He turned around. “You don’t know this is real. You don’t know if I’m telling the truth. I am dead. But look me in the eyes right now and tell me that I’m lying.” I stared hard at him, searching his serious gaze for any hint of deception. I don’t know how long I stood there, searching for something that was not there, but when I finally gave in to the knowledge that he was telling the truth, I collapsed on the ground.

“All I know is that I need to tell you about her.”

“Then tell me,” I said wearily. Father took a deep breath.

“Kenzie was born 13 years before you. When she was conceived, I was in a lot of debt to the Fivkil Order. Your mother and I had no choice but to strike a deal with them.” He paused.

“To give up our firstborn to The Trials when they were 15. And so the deal was made and when it was completed, the Fivkil erased my debt. She never came home.” I looked at him, tears in my eyes.

“I looked up to you, Father. I idolized you,” I whispered. My voice raised. “But you lied to me! My whole life!” He looked down in shame.

“I know. Your mother and I thought it was for the best.”

“How? How was it for the best? Keeping my dead sister, the one you basically killed, by the way, a secret from me? I deserved to know!”

“You did. But we never told you. And for that, I am truly sorry. But be angry at me, okay? Leave your mother out of this.” The tears started falling from my eyes.

“But she agreed to the deal! She kept it a secret too!”

“It wasn’t her fault! I forced her. The Fivkil forced her. She did not want to give up her firstborn, believe me.”

“Yet she still went through with it. You both did!”  I wiped my cheeks and stood, making my hand into a fist. I punched my father in the face, anger and hurt welling inside me. He took the blow. I threw another punch. He took the blow. I punched him until his face was a bloody pulp and the anger inside me dwindled to nothing. I sobbed, falling to my knees, for I don’t know how long. When I looked up he was gone.

I got to my feet once more and stormed home, slamming the door. I threw the bag down and unstrapped my knife belt, tossing that to the floor too.

“My sister died in the Trials. And now I probably will too,” I said hopelessly. But you can fight, a voice in my head replied. And if you can fight, you can win. 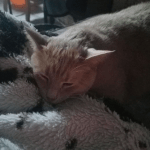