As soon as the decision was made, it was fought. Hence, it’s not very surprising that such a draft exists. The draft was confirmed to be authentic, but not the final decision. Justice Roberts condemned the leak and directed the court Marshal to investigate the matter. If the past decision is overturned, states will be able to choose how to regulate abortion in their state.

The side against the overturn speaks for women’s right to their own bodies. 26 states are certain or likely to ban abortion, with more than 20 that already have abortion bans/restrictions in the books, ready to take effect if the Roe v. Wade decision was overturned. If Roe v. Wade is overturned, reproductive rights would disappear throughout the US. If the ruling was overturned, it would be a legal, political, and social transformation. The court is expected to issue its official opinion by the end of June or early July. 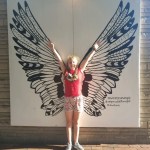 Hi 🙂 I'm Faith, a sophomore here and my pronouns are she/her. I'm just a grammar nerd with some writing talent who somehow found her way to the City Voice. I'll be trying my hardest as a new editor!!

"US Supreme Court" by zacklur is marked with CC BY-NC-SA 2.0.